THANK YOU FOR SUBSCRIBING

Coaching for Business Success: A Leader's Role in a Problem-Solving Culture

Within every organization, there are two primary roles:1) leaders and 2) team members. The roles of each are critical to an organization’s overall business success, but the expectations of each can sometimes be unclear and variable. Definitions of a leader’s role can range anywhere from a ruthless dictator to an effective teacher. Conversely, a team member’s role can range anywhere from a mindless robot to a strategic problem solver. Why is there such a wide variation in today’s definitions and expectations of leaders and team members?

In a football team, coaches and players have clearly defined roles. On game day, there is no uncertainty whether coaches will take a snap or not. Of course, they won’t. The unique roles of a coach and a player on the grid iron are clearly defined. This clarity allows the coach and the player to execute his or her part in the team’s overall success. These clear roles also enable each to focus on improving their specific abilities to better meet the team’s combined objective. These defined roles maximize results and generate mutual respect for everyone’s contribution to the whole. Role confusion, on the other hand, causes chaos in execution, unclear skill development paths, and limited team performance. 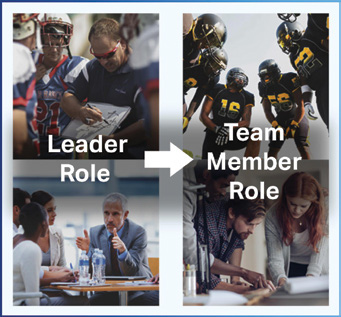 So what is the role of a leader? The most common role seen in today’s business culture is that of a hero. A hero is someone that possesses one or more skills uniquely different from others within the organization. Due to these unique skills, the hero leader can do things others cannot and therefore the hero’s role is to sweep in and save the day. When trouble calls, team members within the organization look and rely on the hero to save them. This model is the natural evolution of leadership within an organization, but offers the lowest form of leadership style. Hero leadership evolves from role confusion.

Role confusion stems from the pattern of promoting leaders. This pattern begins with a team member who has high skill, in depth knowledge, and gets great results within his or her current role. Eventually these skills, abilities, and results get noticed and lead to an eventual promotion. The day following the promotion, what kind of work does this talented individual do? What does he or she do when problems arise? How does this new leader drive results going forward? Is his or her work different now that he or she is a leader? The reality is they will solve problems as they did as a skilled team member. Their mindset and behaviors do not change. This is how hero leaders are born.

The hero leader is sustained because the natural pathway when problems arise is to look to the expert that was promoted. The hero will know the answer and solve the problem. And, as a result, the leader is then rewarded and cheered for his or her efforts and finds confidence and self-esteem in saving the day. Team members learn to rely heavily on this type of leader. The hero leader is extremely busy running from one problem to the next. These leaders thrive on commanding, controlling, and directing the work of others. They know all the ways to get things done and they do get results. When the organization needs better results, the hero leader simply works harder and longer. The organization’s rate of improvement is limited by the hero leader’s skill and time.

However, should this be the role of a business leader—to solve everyone’s problems, to dictate activities, to prescribe actions, and to direct all work? Is the primary role of a team member to simply act in accordance with the direction of the leader and leave innovation and problem solving to someone else? What are the respective roles needed in a problem-solving culture? 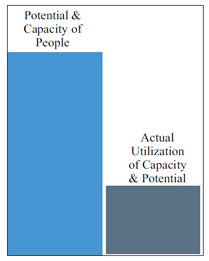 Is the leader’s role to be both the quarterback and the coach? No, of course not. Are team members merely pawns on a chessboard? Again, the answer is clearly NO. This confusion of the leader’s role holding the organization back, is a bottleneck to improvement, and is inhibiting human potential. A hero leader creates dependent employees who might be afraid to speak up, to innovate, to try, or to think. Hero leadership undermines the foundation of an engaged continuous improvement culture where the power of people within the organization is not leveraged and instead a culture of dependence and insecurity is fostered.

In a high-performance problem-solving culture, the roles of team members are defined. Their role is to be engaged, to collaborate, to learn, to experiment, to create value, and to solve problems. Team members execute the daily mechanics of the business; they are uniquely equipped with the ability to diagnose and to improve those mechanics. They are on the field playing in the game—executing and improving their roles, their work, and their assignments.

In conclusion, leaders can be the source of role confusion. Leaders must understand and act their part. They must focus on their primary output— creating a circumstance where team members can see and solve problems. Leaders do this through establishing a condition where each team member has a shared purpose and definition of wining, an aligned plan for execution, high skill, robust systems for execution, and shared beliefs in best practices and principles. When leaders focus on these elements, team members can fulfill their role of driving great business results through smart choices. This is the role and the work of a leader.

Headquartered in Orem, UT and founded in 1978, US Synthetic is a family-oriented business specializing in energy, oil and gas, manufacturing, synthetic diamond, and drill bits.

However, if you would like to share the information in this article, you may use the link below: